Warren City Hall is closed to the public and many departments are working remotely when possible.
To contact a specific department for assistance, please reference the city’s phone directory or the department’s page on the website.


SUSPENSION OF J&J VACCINE IN WARREN THIS WEEK

We are suspending distribution of the J & J Vaccine this week based upon the federal government mandate that we pause on the distribution of this vaccine until a thorough investigation has been completed regarding six blood clots in people between ages 18-48. This is six blood clots out of nearly seven million people who have been given the J & J vaccine. The CDC has recommended a pause in distribution until they can determine whether there is a connection between the six clots and the vaccine.

So the vaccine fair this week on Thursday, Friday, Saturday, and Sunday will be cancelled until there is clear evidence that there is no connection between the vaccine and the six people who got blood clots.

It’s common for regulators to investigate any sign of a possible concern. This is clearly a rare condition affecting only six people out of 7 million people that have taken it in the U.S. But it’s better to pause at this point and wait to see if this is ok to continue.

We will resume distribution of vaccines when it’s proven beyond a doubt that it is safe to do so. We are also planning on having another vaccine fair with the Pfizer vaccine later this month. Our previous partnership with Mclaren Health Systems and Walgreens used the Pfizer vaccine.

So far we have not received any concerns or complaints from those people who took the vaccine last week.

Warren Mayor James Fouts and Macomb County Executive Mark Hackel announced a partnership between the city and county to administer vaccines in a drive-thru clinic at Warren city hall administering Johnson and Johnson. That partnership, which has been in the planning stages for over a month, begins April 8 from 3:00 pm – 8:00 pm and will run for four consecutive weeks – Thursday-Sunday. Residents can sign up for appointments for that effort on the Macomb County Vaccine Web Portal at https://macombcovidvaccine.itfrontdesk.com/apptonline/appt.html and click on: 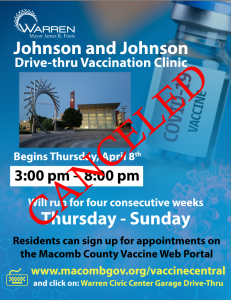