As I promised, we now have the Preston Singleton Ave. signs up on Stephens and the Van Dyke-Hoover area in memory of five-year-old Preston who sadly lost his life approximately two weeks ago due to a hit and run driver who was late for work. This should be a reminder not only of this young life needlessly lost by a careless driver, but also as a caution to other drivers in a rush, to drive cautiously so as to respect all lives. Preston was a very energetic bright young man who was denied a future due to a reckless driver. He has great caring parents who will be affected by this horrible event for a lifetime.
There will also be a plaque going up in his memory.
God Rest Preston Singleton!

The evening of Thursday, July 1, 2021 I attended a very solemn occasion for a very impressive candlelight service dedicated to the passing of five-year-old Preston Singleton in a hit and run accident at 9:45 PM on Tuesday, June 29, 2021. I’m dedicated to naming that street or intersection after Preston.*
Everyone that I met were good people all dedicated to lighting candles and caution to what suddenly happened to this young man. Both his mother and dad are good people that are heartbroken for the loss of their five-year-old son. I offered my support, card, and offered to support anything they might need from the city. I’m working on re-naming the street intersection.

This was a tragic event that took the life of a bright shining young boy from his parents. He was crossing Van Dyke at Stephens with his aunt and young cousins when it suddenly happened. The aunt who was with him and her children witnessed what happened and are devastated and it’s clear that counseling will be necessary for her children and others who saw it.

I’m proud of the Warren Police for their quick apprehension of the suspect. I spent some time with both parents of Preston, the uncle, the aunt and the grandfather. All shared with me their shock, anger, and deep sadness at the accident that took this little boy’s life. This is something that should not have happened and it speaks loudly against those who disregard public safety in order to be on time.

*I’m proposing to dedicate that street as Preston Singleton avenue to honor this young boy at the intersection where his life was suddenly and permanently taken away from his parents and friends. It’s a complicated process but I think combining the current name and adding the new memorial name should suffice.
I got into a lot of hugs with Preston’s family and friends. It overcame most of us with what was taken from Preston’s family and from his future. Hopefully, this memorial street will serve as a permanent reminder of what can happen when drivers are in a rush. A reminder that this should never ever happen again. 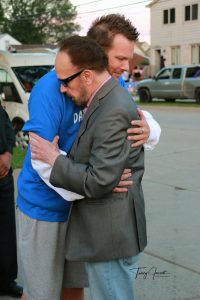 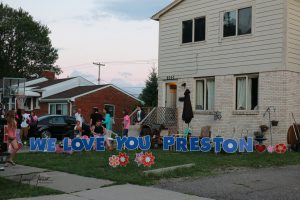 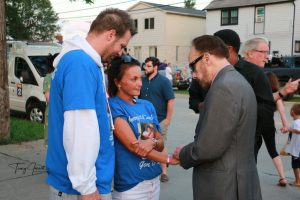 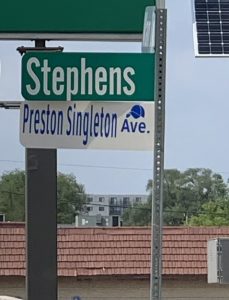