Spongy Moths (Lymantria dispar), formerly known as Gypsy Moths populations can grow very large, and they can become a nuisance and detrimental to a homeowner. Large populations can defoliate trees. Trees with other stress factors, such as drought, could be damaged by this type of defoliation. Several years of recurring defoliation will eventually kill trees. The large number of caterpillars and their waste (frass) can prevent homeowners from using their outdoor spaces in the summertime. In some cases, the caterpillars can cause allergic reactions in people.

The female moth lays the egg masses in July. Egg masses are a buff yellow-brown color, typically tear-drop shaped and up to 2 inches in length. Masses are laid in protected areas on trees as well as on places such as play equipment, lawn furniture, and soffits on homes, garages, vehicles and wooden fences. Egg masses laid in mid-July through August will survive the winter and hatch in the spring producing hundreds of caterpillars from each egg mass. 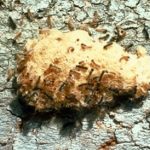