City Council to Vote on Proposed Settlement at its Regular Meeting of November 24, 2020

The Warren City Council is seeking public input on a proposed settlement agreement that would license 28 provisioning centers in the City of Warren. The settlement would result in the dismissal of a lawsuit involving 31 marihuana license applicants that are seeking damages against the city as a result of alleged violations involving the application process in 2019. The alleged violations occurred during the previous city council term in 2019. The settlement would result in licensing 28 marihuana provisioning centers throughout the city. The City Council is releasing an interactive map for residents to view the proposed location of the facilities at the following link:
https://www.google.com/maps/d/viewer?mid=1m1966xW7U_I0ob7_6stDGm42TxPBCA9F&ll=42.469451177410086%2C-82.96726966208263&z=12

Council President Patrick Green stated: “Input from residents is a key part of the process. City ordinance allows 15 facilities and the settlement would increase the number to 28 facilities. We are asking residents to look at the map and tell us what they think. Before considering a major settlement that would license 28 facilities, we are requesting public input for consideration at our regular meeting of November 24, 2020. Residents can email the city council at Citycouncil@cityofwarren.org to express their thoughts and opinions on this settlement.”

At its Regular Meeting of November 10, 2020, the Warren City Council was presented with a draft Settlement Agreement to resolve 11 separate lawsuits against the city that were consolidated into one case*. There are 31 litigants in this case who are marihuana business license applicants seeking to operate marihuana provisioning centers, which are retail outlets for the sale of marihuana. The former city council awarded 15 provisioning center licenses in October 2019 after a competitive application process that was subsequently challenged by other applicants that did not receive a license. The original 15 licensees intervened in the case after an April 14, 2020 decision by Circuit Court Judge Carl Marlinga holding that Medical Marihuana Review Committee appointed by the former city council violated the Open Meetings Act (OMA) by making its licensing decisions in secret. As a result of Judge Marlinga’s ruling, the original 15 licenses would be voided as a result of the OMA violation. In sum, there are 31 marihuana applicants that are parties to this litigation: the original 15 licensees that are losing a license due to the OMA violation and 16 other parties that allege that their applications were not properly evaluated. 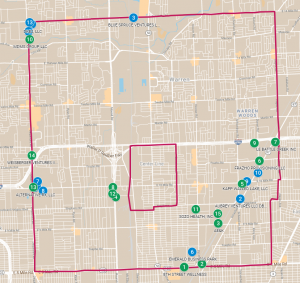