I have directed that Warren City Hall will be lit up blue and green tonight, Monday, Feb. 21, 2022 from dusk until dawn on Tuesday, Feb. 22, 2022 to bring awareness to eating disorders during National Eating Disorders Awareness week (NEDAwareness).

This is the third year Warren is participating and partnering with the National Eating Disorders Association to represent NEDAwareness.Warren’s participation helps bring greater recognition to this important mental health issue – eating disorders have the highest mortality rate of any other mental health issue, so providing support and guidance to individuals and families struggling with this mental health issue is so critically important. Eating disorders are a growing crisis that affect almost everyone and have been exacerbated during the pandemic.The lighting event will be promoted via social media with the main hashtag #NEDAwarenessMobile (586) 481-0545, Home (586) 573-8058, Office (586) 574-4520.Sincerely,Mayor James R. FoutsCity of WarrenOne City Square- Suite 215Warren, MI 48093-6726586-574-4520mayor@cityofwarren.orgwww.cityofwarren.org 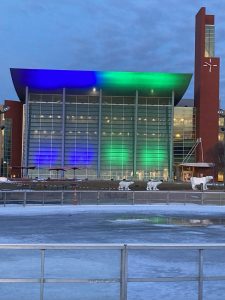